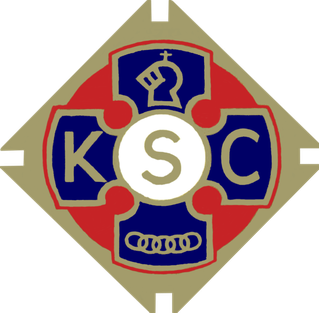 The Knights of St Columba is a Catholic fraternal service organisation. Founded in Glasgow in 1919, it is named in honour of Saint Columba, a Christian missionary from Ireland who helped to introduce Christianity to some of the people in the north. The organisation describes itself as being dedicated to the principles of Charity, Unity and Fraternity. There are more than 4,300 members of the KSC, in over 240 councils across Great Britain — it features in England, Scotland and Wales. Membership is limited to Catholic men aged 16 and over, and promotes the social doctrine of the Catholic Church.

The organisation is non-political and essentially democratic, does not admit women, and exists to support the mission of the Catholic Church. The KSC organisation is a member of the International Alliance of Catholic Knights. Founder of the Knights and first Supreme Knight was P J O'Callaghan.

Admission ceremonies usually take place in a Catholic church during the celebration of Mass.

Provincial Council 2 of the Knights of St Columba is situated within the area of the Catholic Diocese of Liverpool; in the North West of England. Liverpool Province has the honour to be the home of the first council to be established in England in 1920. The Province currently has ten councils, St Charles and St Thomas More Parish falls under Council 9 - South Liverpool.

“Our aim is to help people worse off than ourselves”.