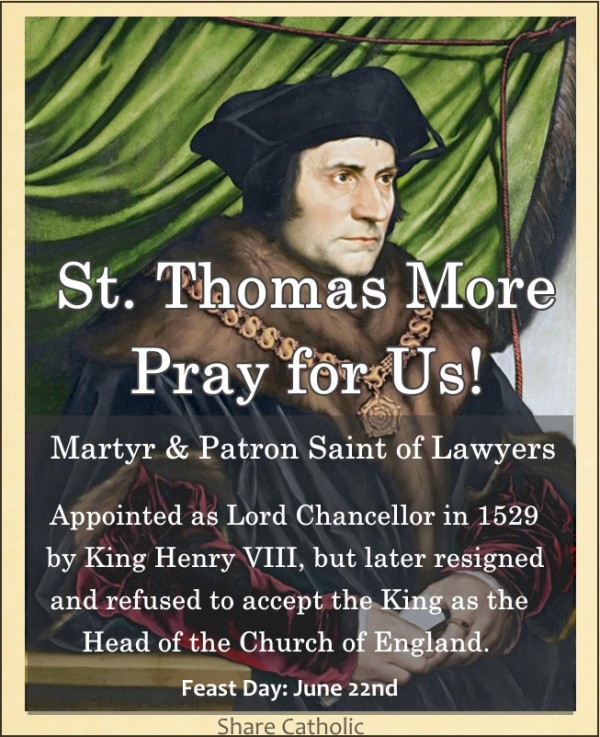 St. Thomas More Pray for us

Sir Thomas More (7 February 1478 – 6 July 1535), venerated in the Catholic Church as Saint Thomas More, was an English lawyer, social philosopher, author, statesman, and noted Renaissance humanist. He was also a councillor to Henry VIII, and Lord High Chancellor of England from October 1529 to 16 May 1532.[3] He wrote Utopia, published in 1516, about the political system of an imaginary, ideal island nation.

More opposed the Protestant Reformation, in particular the theology of Martin Luther and William Tyndale. More also opposed the king's separation from the Catholic Church, refusing to acknowledge Henry as Supreme Head of the Church of England and the annulment of his marriage to Catherine of Aragon. After refusing to take the Oath of Supremacy, he was convicted of treason and beheaded. Of his execution, he was reported to have said: "I die the King's good servant, but God's first".

Pope Pius XI canonised More in 1935 as a martyr. Pope John Paul II in 2000 declared him the "heavenly Patron of Statesmen and Politicians".

A PRAYER TO ST.THOMAS MORE

THOMAS MORE, counselor of law and statesman of integrity, merry martyr and most human of saints:
PRAY that, for the glory of GOD and in the pursuit of His justice, I may be trustworthy with confidences, keen in study, accurate in analysis, correct in conclusion, able in argument, loyal to clients, honest with all, courteous to adversaries, ever attentive to conscience.

Sit with me at my desk and listen with me to my clients' tales. Read with me in my library and stand always beside me so that today I shall not, to win a point, lose my soul.

PRAY that my family may find in me what yours found in you: friendship and courage, cheerfulness and charity, diligence in duties, counsel in adversity, patience in pain—their good servant, and God's first.